Every economy’s money supply must start at some amount and increase to another amount over time to accommodate real economic growth, but how much money is the correct amount? The answer to that question depends on many factors and each economy has different socioeconomic characteristics throughout its lifespan that require different amounts of money at different points in time to function effectively. For Gini, the optimal starting money supply is 1 billion Gini units and the optimal maximum money supply is 10 billion Gini units. Gini’s initial money supply and sustainable growth rate can be visualized in the following chart. 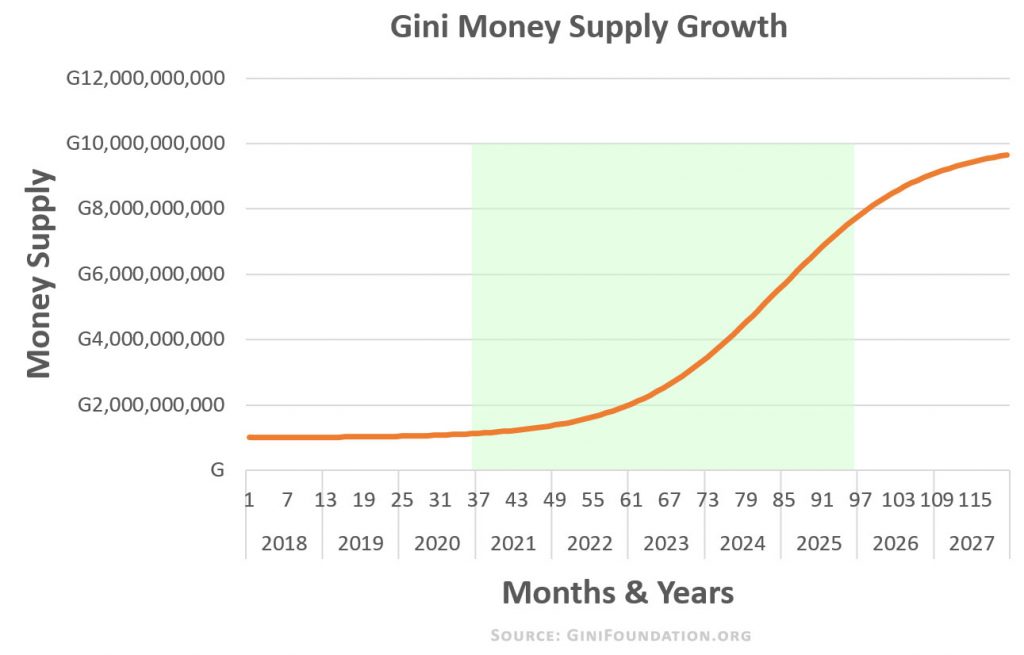 Why 10 Billion Max? The maximum money supply of cryptocurrency projects today is all over the map—ranging from about 11,000, to Bitcoin’s 21 million, up to 1 trillion units in some obscure cryptocurrency projects. Whenever we have asked project teams, “Why did you choose x units for your max money supply?” their answers typically amounted to, “It just seemed like a good number to use.” That doesn’t mean they don’t have some kind of logic behind their choices, but in general, their logic isn’t rooted in a deep understanding of historical money supplies in the real world. In contrast, we examined the money supply issue from several different perspectives to develop a technically sound, logically consistent, and sustainable Gini monetary system based on the following principles.

10 Billion is the Magic Number. During our research and analysis, we made several interesting observations. In particular: 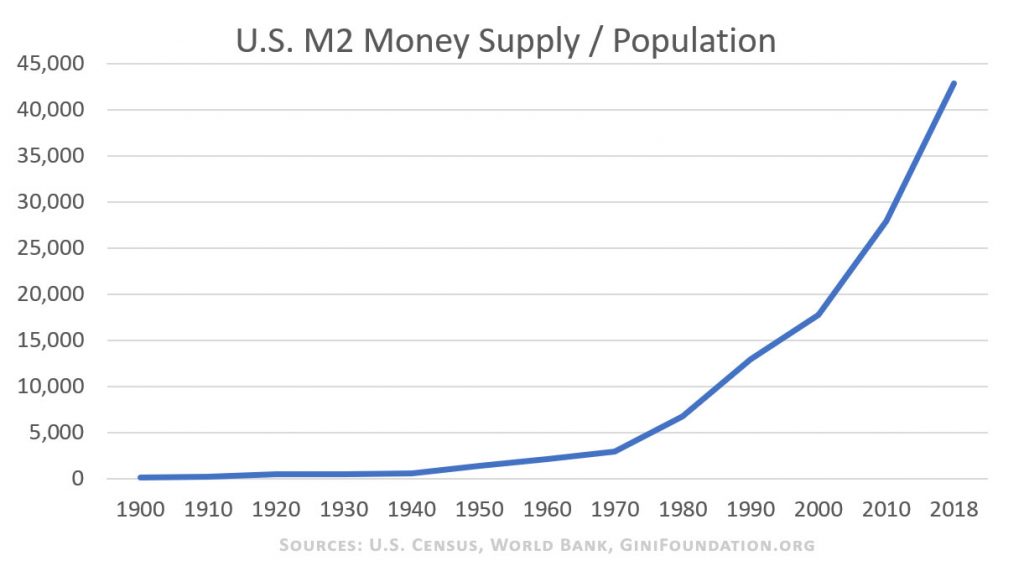 The Gini Money Supply is Designed to Preserve Gini Value. One of the most important observations from our analysis is that a money supply must be designed to grow at a rate equal to or slower than population growth to prevent currency debasement. For this reason, the Gini money supply is designed to grow slightly slower than Gini stakeholder population growth. This ensures that the demand for Gini will be strong relative to the supply. Thus, the gradual increase in the Gini money supply to accommodate real-world commerce over the initial 10-year ecosystem-building period has a slightly dis-inflationary effect. This prevents the value of Gini from being eroded by the natural initial supply growth required to create the Gini ecosystem.

Gini Currency Units Are Divisible to Accommodate All Future Needs. Just like 1 USD is divisible into 10 dimes or 20 nickels or 100 pennies without diminishing their total purchasing power, the Gini cryptocurrency is divisible into smaller units, too. As the Gini ecosystem expands, 10 billion base Gini units can be divided into 10-24 Gini units if necessary without diminishing the purchasing power of the total Gini supply.4 This will be increasingly necessary as the Internet of Things (IoT) and billions of autonomous distributed apps start producing trillions of micro-transactions every year.

Why Is Gini Dis-Inflationary? The population of stakeholders within the Gini ecosystem will grow over time. As the population grows, the Gini money supply automatically and naturally grows based on several mechanisms discussed in the Gini book. However, for now, it’s important to understand that Gini’s money supply growth is designed to be dis-inflationary (not deflationary) for three reasons: 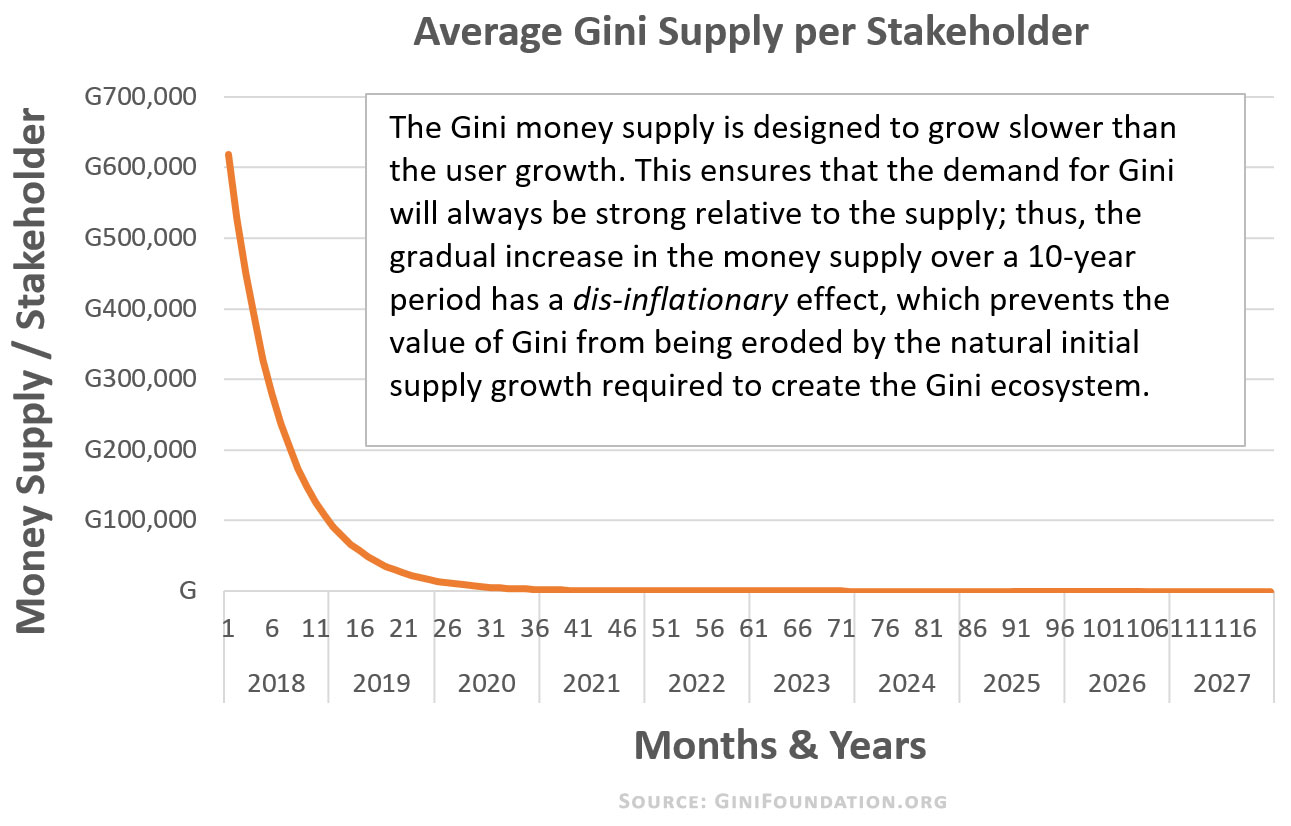 Statistical Money Supply Dispersion Is Not the Same as Broad Wealth Distribution. Just because all networks tend to experience a reduction in per-capita resource utilization does not mean all cryptocurrency economies automatically produce a broad distribution of wealth. Many cryptocurrency project teams confuse statistical dispersion with actual wealth distribution. (As can be seen in this debate.) This is the same as confusing the concepts of per-capita wealth and median wealth. They are entirely different concepts. For example, if Bill Gates and two homeless people (each with only $1 in net worth) are in the same room, their per-capita (average) wealth would be about $31 billion in 2018! In contrast, their median wealth would be only $1.5 This is why all the other cryptocurrency projects that claim trickle-down economics will fix their wealth concentration problems over time are being disingenuous or naive.

This is just an overview of all the research, analysis, and principles that have been taken into account as we have developed Gini's sustainable monetary policy and systems. The Gini book provides a much deeper understanding of all these concepts.

[1] This includes total estimated mined and un-mined supply. The World Gold Council provides a slightly lower estimate, but there are numerous other estimates that are much higher. So, this is a reasonable average. Additionally, the precise figure can vary depending on whether Troy ounces or Imperial ounces are used in the measurement. Troy ounces are more common for precious metals.

[5] See page 29 of the Global Governance Scorecard for a more detailed explanation of the impact of using per-capita vs. median wealth measurements.