What is the Gini BlockGrid?

The Gini BlockGrid serves the same basic purpose as a blockchain, but it's much faster and more efficient in terms of parallel-processed data storage and retrieval operations. Technically speaking, the Gini BlockGrid is a member of the Directed Acyclic Graph (DAG) class of data storage structures because it stores data within a parallel, node-based graph structure that is much more efficient than the typical singly-linked-list blockchain structures used by Bitcoin, Ethereum, and nearly all other cryptocurrencies.

However, unlike other DAG's, the Gini BlockGrid is decentralized and distributed as an interconnected grid of private blockchains, which dramatically increases the security, privacy, speed and throughput of the Gini cryptocurrency compared to previous generation cryptocurrencies. The Gini BlockGrid logically isolates each user account from all other user accounts, which protects the privacy of each account, but each stakeholder still has the ability to transact directly with all other stakeholders with nearly instantaneous transaction confirmations. 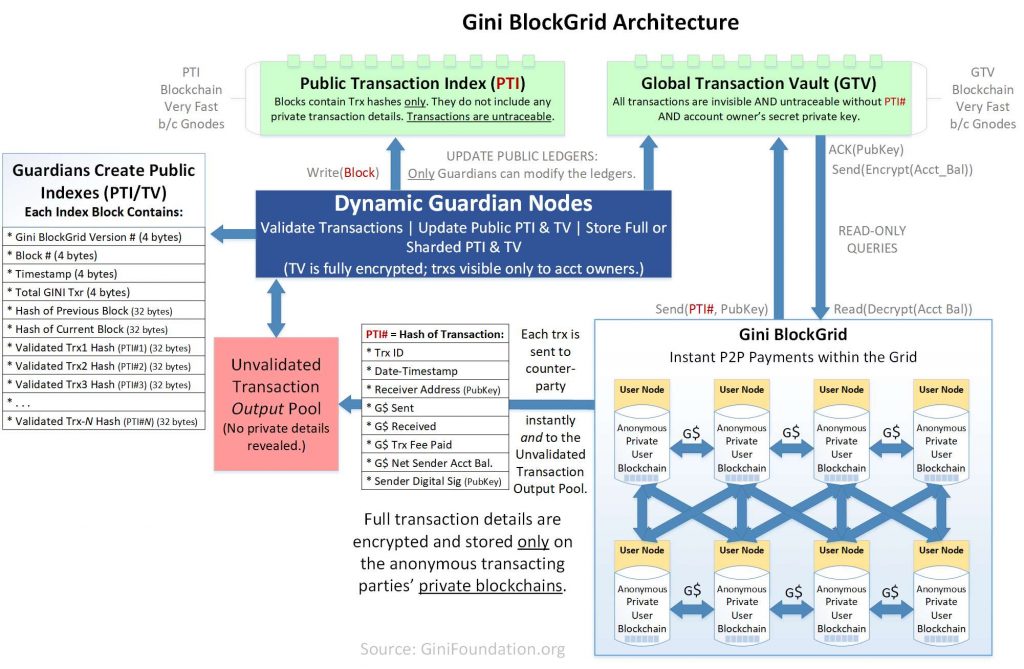 Compared to previous generation cryptocurrencies, the Gini BlockGrid architecture is designed to achieve much higher transaction speed and throughput, true transaction privacy, and a much smaller storage burden for Gini's Dynamic Guardian Nodes, which are roughly similar to "full nodes" in the vocabulary of other blockchain-based cryptocurrencies.

For simplicity, some of the Gini documentation might use the generic term "blockchain" to communicate the idea that blocks of data are interconnected like a chain, but the precise term for Gini's data storage architecture is a "BlockGrid."