Is Gini a Deflationary Currency? 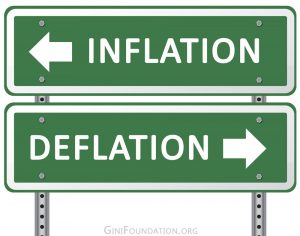 Some people acknowledge that the Stake Stream feature within Gini's Value Streams System creates structural incentives for stakeholders to save their Gini, but they wonder if it might have long-run deflationary consequences. Let’s spend a few minutes debunking the sinister myth that fuels the fear of runaway deflation in any economy.

The Origin of Deflation Propaganda & Fear-Mongering. This fear of deflation is based on over 100 years of propaganda that many banks, politicians, and mainstream economists have been spreading since the birth of the Federal Reserve in 1913. That's when systemic bubbles began within the U.S. economy, which gave banks and their cronies in government incentives to keep the bubbles going until they popped in the 1930s, 1970s, in 2008 . . . and the biggest bubble of all that we're in right now is going to pop, too. Additionally, 1994 was the year when U.S. banks started cramming our mailboxes full of credit card offers immediately after they unleashed the FICO scoring system on the American population. That event transformed the U.S. from the most prosperous nation on Earth to the most indebted nation in human history.

Consumption Zombies Go Straight to Debtor’s Prison. To keep the debt-based ponzi scheme going, the banks, politicians, and mainstream economists have been falsely blaming “deflation” as the bogeyman that caused the Great Depression. This fear-mongering is intended to transform Americans into mindless consumption zombies. As a result, today, approximately only 5% of the American population has sufficient savings to retire because the inflation-based system that we have today has been sucking away all their wealth and dooming them to debtors prison.

Gini Is Not Deflationary. Gini, Bitcoin, etc. are dis-inflationary, not deflationary. That means their rates of inflation gradually slow down over time, but that’s not the same as deflation. In contrast, actual monetary deflation is a cyclical economic phenomenon caused by a significant reduction in the money supply, and/or widespread debt liquidation, and/or severe economic shocks. None of these events have anything to do with Gini's predictable and gradual dis-inflation that occurs automatically every two years.

When Is Deflation Bad? When all three events (significant reduction in money supply, rapid debt liquidation, and economic shock) occur simultaneously, it reduces the velocity, supply, and demand for a nation’s currency, thereby pushing down prices of all goods and services throughout an economy. When all three dynamics occur simultaneously, that’s bad because it creates an economic shock that paralyzes an economy, which was one of the most significant factors that triggered the Great Depression. However, that kind of rapid monetary deflation and corresponding steep decline in economic activity can only occur after a rapid monetary inflation based on incompetent politicians injecting their economies with huge amounts of Monopoly money, which is impossible with Gini's Monetary Policy.

Falling Prices & Gradual Deflation Are Good for Humanity. Many industries are naturally deflationary (in the price level sense) and they don’t create catastrophic damage to any economy. For example, the price of cell phones, computers, virtually all electronics, batteries and renewable energy technologies, transportation systems . . . are constantly falling, which benefits humanity. In fact, deflation is good for savers, consumers, and some types of investors because it increases their purchasing power.

Deflation is Bad for Reckless Governments & Banks. Deflation is bad for virtually all debtors because it increases the real cost of their debt. This is why debt-binging governments and banks worldwide today are terrified by deflation, which is why they brainwash their citizens to fear deflation and train them to be consumption zombies. To perpetuate their mountains of debt, they implement inflationary policies that decrease their citizens’ purchasing power, which is exactly the same as stealing portions of their citizens’ wealth every year.

Humans Don’t Delay Essential Purchases. Many economists regurgitate this myth: “Deflation causes humans to delay purchasing activities because they want to wait for a better deal.” That might seem logical, but there’s absolutely no evidence for this claim whatsoever. In fact, when was the last time you waited any significant amount of time to buy something you needed because you were waiting for a slightly better deal? You might wait for a short period of time for luxury items, but that temptation exists at every price level. In reality, if you need something now, you’re going to buy it now. Thus, an expectation of falling prices has virtually zero impact on an economy because the vast majority of things that we buy (food, housing, energy, transportation, education, insurance, and all other necessities) must be purchased when we need them.

Bottom Line: Gini is Designed to Cure the Diseases of Runaway Inflation & Debtor’s Prison. The problem that Americans and many people in other consumption-based economies have today is a lack of savings, not a lack of spending. When humans don’t save, they become slaves to banks and governments. So, we should all be happy that Gini's Value Streams System provides a structural incentive to save your Gini because self-serving politicians will never give us a fiat-based economy that encourages savings ever again.