In a world of fragmented media and powerful corporate and political entities flooding all media channels with their own version of reality to serve their narrow agendas, perception and reality are often disconnected. In this environment, it can be very difficult (even for smart humans) to distinguish between facts vs. fictions, emotionally-driven debates vs. empirical evidence, and data-driven analysis vs. ideologically-driven theories.

At the Gini Foundation, we analyze thousands of pages of socioeconomic and geopolitical data every year. We frequently discuss these data with other thoughtful humans from across the ideological spectrum. We do this to help our Gini stakeholders see and understand why various socioeconomic and geopolitical events are occurring. These insights then fuel the R&D of Gini's unique, nonpartisan technical systems and solutions.

I recently had a discussion with a dear friend and colleague. Let's call him "James". James is very smart, but James and I disagree on the true condition of the U.S. economy today. Disagreements often lead to important revelations; so I always welcome thoughtful, evidence-based discussions with other thoughtful and smart humans.

In this case, James pointed to the record stock market highs and his general perception that life is probably getting better for a majority of Americans based on the fact that thousands of people are attending President Trump's political rallies. He also said the media is over-exaggerating various problems. The following was my response, which might be useful to other people who find themselves in similar discussions.

For a large majority of Americans today, their economic prospects and quality of life are substantially worse today than at any time since the Great Depression. Since the 1980s, and accelerating after 2008, the bottom 70-80% of the population has been sliding backward on every meaningful quality-of-life metric (real median income, life expectancy, job security, personal savings, affordability of college education and healthcare, personal debt levels, affordability of housing, economic mobility...). The গিনি বই and many other books in our গিনি বুক তালিকা go much deeper into the true condition of the U.S. and global economies.

Additionally, many millions of humans in the U.S. and around the world see and feel that these conditions are getting worse and they're feeling a sense of hopeless despair. They see we have less-than-ideal creatures in charge of our government and a profit-driven media complex regurgitating corporate talking points, pointing to giant market bubbles that benefit a tiny number of people at the top as "proof" of economic progress, while everybody else slides ever deeper into debt slavery just to survive.

This is why, for the first time in the history of capitalism, major polls across many countries indicate that a majority of humans on Earth today believe capitalism causes more harm than good. Regardless of whether we agree with his policy prescriptions or not, these are the reasons why Bernie Sanders is so popular today.

It's easy for the human mind to experience a narrow slice of reality and subconsciously project that narrow perception onto the world, which is what many people in NYC and other affluent communities have been doing for years. But the economy is definitely not great. A significant majority of Americans and majorities in many other countries today have legitimate reasons to be deeply angry. When the mainstream media covers the real problems at all, they're simply giving voice to what's already simmering beneath the surface.

James responded to my points above with several thoughtful comments. For the sake of brevity, I'm only including the comments that highlight our current perceptual differences. James said:

I would like you to show me the charts on the BLS site that indicate workforce participation, wages, employment, productivity, income ratios, etc are GETTING WORSE since 2016 to present.

All the charts in অস্ত্রশালী সম্পদ কেন্দ্রীকরণ অর্থনীতি ধ্বংস করে are current as of Q4 last year. All the data is cited and nearly all of it is based on BLS, Federal Reserve and "official" government sources. The charts relevant to your question start at this point in the article.

However, focusing on short-term data is part of the problem. The reason our global economy and U.S. political system are broken today is because politicians and corporations have been focused on short-term data and short-sighted policies. No serious economist is distracted by short-term charts (i.e. charts less than a 5-year business cycle) because there are economic ebbs and flows during every presidential administration because that's the nature of the business cycle.

Additionally, every time period is affected by short-term fiscal and monetary policies, which can provide temporary boosts to certain metrics while simultaneously destroying the underlying integrity of the economy. Just like a crack addict can experience temporary pleasure, while their body, life expectancy, quality of life, future opportunities, etc. are destroyed in the process.

Finally, when it's politically expedient, the federal government changes the formulas they use to measure things like the unemployment rate, real median income, etc. They did this in 1994 for the unemployment rate and they've done it for real median income multiple times over the past six years. They also frequently "revise" the data retroactively due to errors and (likely) political factors. Collectively, these politically motivated changes and constant revisions make short-term analyses and the predictably manipulative White House talking points mostly meaningless.

The chart below illustrates that, since the 1980s, income to the top has risen between 5-15 times more than the bottom 90%. Nothing in any of the data that I've seen from the BLS or any other official data since Trump was elected suggests this trend has reversed.

There is no official BLS data available yet for the period between 2018 to 2020 (They're usually about 14-18 months behind.), but do you really think there is any significant chance that these long-run trends are going to miraculously change and workers are suddenly going to receive more than a tiny fraction of the GDP growth that has gone to the top over the past few decades? That's not going to happen without deep, structural change; and deep, structural change won't happen until the systemically corrupt electoral system is substantially reformed. (Gini can help create the conditions for this.)

Going back to the Golden Age until now is an easy argument to make.

That is Trump's overly simplistic argument about the Golden Age. That's not the case I'm making here. Given the gains in productivity, GDP and innovation since the 1980s, all the median quality-of-life metrics I cited should be improving, but they are deteriorating.

The people we see at Trump rallies are generally cheering for what they hope he can do because they still think he's their savior for various sociological/political reasons, which have nothing to do with real-world economic realities. There is nothing in the data that suggests there has been any significant widespread increase in the median quality-of-life metrics since he was elected. In fact, the metrics have been flat or falling for decades because, from a systemic perspective, it doesn't matter who is in the White House; every U.S. president has been following the same unsustainable Wall Street-friendly economic and foreign policy agenda since the 1980s.

In addition to our own research and analysis at Gini, I've read/watched many well-documented books, data-heavy articles and documentaries about the true state of the economy, which makes it impossible to believe that Trump supporters are cheering him because their lives are significantly better today than in the past. People cheer for many reasons (primarily tribal impulses); so it's not logical to assume they're cheering because the quality of their lives is better when there is a tsunami of data and real-world evidence that proves the exact opposite is true for a significant majority of Americans.

Regarding the perception-reality principle, James said:

I don’t think the human-mind-perception-is-reality argument is good enough, because if that was correct, then we would see landslide victories for democrats selling their savior policies (which don’t save anything). 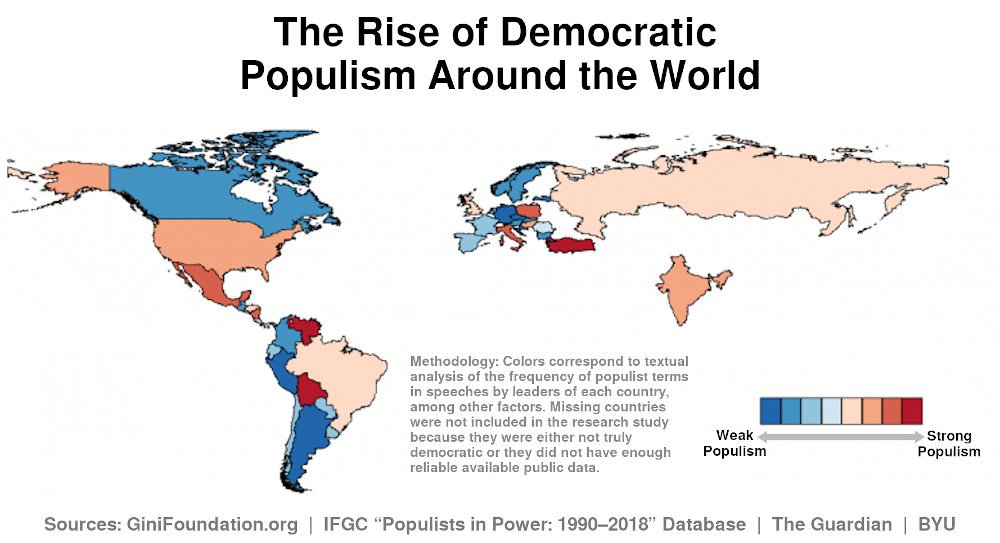 In the U.S., we don't see the kind of "landslide victories" you're referring to here because the political system is structurally rigged in favor of the status quo for many reasons, some of which I've covered in our গ্লোবাল গভর্নেন্স স্কোরকার্ড.

That structural corruption conceals the reality: The U.S. political system is unquestionably out of touch with the sentiment of the vast majority of the American population. This is well-documented by many polls, studies and books (See the গিনি বুক তালিকা.) that show approximately 80-90% of the U.S. population disapproves of Congress, an increasing trend since 2001. This correlates exactly with deteriorating structural economic and labor market conditions in the U.S. and the short-sighted policies that are responsible.

I also don’t think the “people in charge of our government” are categorically corrupt....

I agree with this general principle, which is why we have a significant section of our ভাঙা পুঁজিবাদ book devoted to the "Bouncy Castle", which is a metaphor about how broken incentives in the federal government corrupt otherwise good people.

However, my point here was about the perception of a large majority of Americans who justifiably believe the U.S. political system is corrupt. Trump's policies and behavior have done nothing to change that widespread perception. This perception amplifies the pain that a significant majority of Americans are experiencing economically because they correctly assume the political corruption that preserves the status quo translates into perpetual economic suffering, which gives them more legitimate reasons to be angry.

That brings us back to my primary point overall: The true condition of the economy is much worse than most of my financially comfortable friends and colleagues believe. This disconnect from the facts on the ground reduces the urgency that financially comfortable humans feel when they're presented with important solutions like Gini. This slows their support and adoption of Gini, which slows down the progress that we are working to achieve for humanity.

I've had many discussions like the one above with my friends and colleagues in NYC and other affluent communities around the world. No matter how many data-rich articles and books we provide, they usually ask for আরো প্রমাণ. Even when they're presented with significant evidence of these problems, they usually don't really believe anything that contradicts what they already want to believe.

In contrast, the significant majority of humans sliding into poverty and debt slavery in the U.S. and around the world today are living these problems every day. Their daily reality of suffering, chronic financial and existential stress, facing bankruptcy over unexpected $400 expenses (40% of Americans and rising) . . . is their proof. They don't need any more proof.

Since they're not suffering from these problems every day, these are difficult discussions to have with my friends in the top-1% because it requires a significant amount of time and research for them to truly understand and appreciate the depth and urgency of these problems. (The গিনি বুক তালিকা exists to help accelerate this process.) Unfortunately, many otherwise smart and educated humans in the top-1% are not willing or able to spend the time necessary to parse the truth from both ideological sides of the media circus today. Many of them also have conscious and unconscious financial incentives that prevent them from seeing these realities.

If you ever find yourself in one of these conversations with your friends and colleagues, please gently and respectfully share this article with them. If presented thoughtfully and respectfully, they might appreciate you for helping them see a broader perspective. This can help them have a deeper appreciation for Gini's important work and unique solutions.